Given the global reliance on trade as a means of subsistence, it is only natural that economies will rely disproportionately on certain industries according to their available resources and relative production capabilities in the national or global market. However, societies whose economies are heavily dependent on one or two industries can be dangerously sensitive to shocks in these industries. Multi-dimensional economies with a high level of diversification are generally better equipped to handle such events. 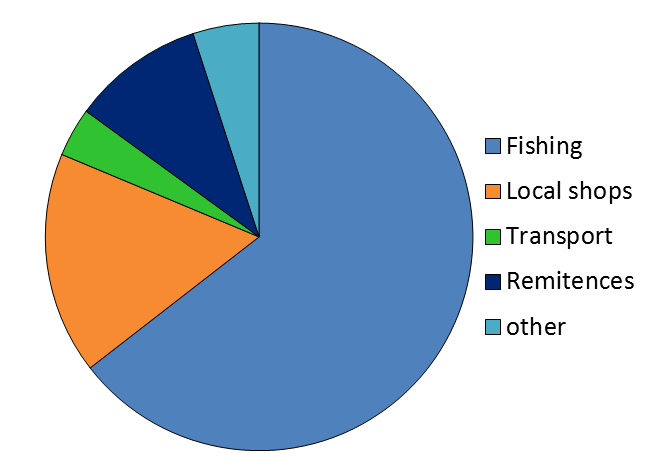 In Tasajera, fishing is the overwhelmingly dominant industry, with 64.5% of the island’s households identifying it as their primary source of income. Historically, this has been a booming industry which could easily support the community. However, since trawlers owned by large corporations began trolling the waters near Tasajera’s shores, the fish catch has been dismal. This and other events have been destructive for the island’s economy. For more information on fishing in Tasajera, see Fish Catch (insert hyperlink).

Another interesting piece of Tasajera’s economy is remitences. 10% of Islanders cited money sent from elsewhere, mostly family members abroad, as their primary source of income. This indicates better opportunities being available outside of the community, and could be connected with the increasing youth migration (insert hyperlink) that has been observed in recent years.

There are projects being undertaken to diversify Tasajera’s economy and develop alternative sources of income (e.g. tilapia and crab farming). Emana’s “Artisans of the Sea” project aims to advance womens’ participation in the economy by teaching them craft and jewelry making and facilitating the selling of their products outside Tasajera and abroad.

Economic indicators are essential for securing the long-term sustainability of a community.

The social dimension of a community influences the health and wellbeing of its members.

Environmental issues have a strong impact on the wellbeing of a community.